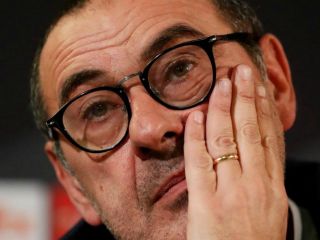 Chelsea fans are not at all happy with manager Maurizio Sarri once again as he names perhaps his most bizarre team of the season so far away to Cardiff City in the Premier League this afternoon.

The Blues have lined up without Eden Hazard, N’Golo Kante and Callum Hudson-Odoi, which are the decisions most likely to be getting their supporters more than a little upset.

Hazard and Kante are world class performers who’ve been hugely important for the club in years gone by, while Hudson-Odoi is a hugely promising young player who has been fast-tracked into the senior England squad despite somehow still being overlooked by his club manager.

Some will no doubt also be disappointed to see Marcos Alonso starting over Emerson Palmieri at left-back, with the Spaniard one of a number of players who’s seen as seemingly undroppable by Sarri despite some underwhelming form for most of the season.

Sarri has completely lost it. What the fuck is that? https://t.co/3n3F3oUAj3

For the 100th time this season, Sarri has lost the plot ?

Sarri has finally lost it yo

You are a real dick, Sarri. The players you've taken out aren't the problem; Willian and Jorginho are.

After seeing that lineup Sarri can get the fuck out've the club. HAZARD, KANTE and CHO all on the bench. Willian and Pedro up front. FUCK OFF

Willian,pedro,barkley,alonslow all starting!only sarri knows how he chooses his lineups ffs!don’t even wanna watch today’s match now ,so so disappointed!

AHAHAHA WILLIAN AND FUCKING PEDRO AGAINST CARDIFF FUCKING CITY. What the fuck does Callum have to do like fucking seriously man HE PLAYED FOR ENGLAND TWICE. Fuck off Sarri. https://t.co/ctDLIx7uVX