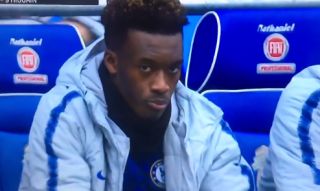 If looks could kill…Chelsea manager Maurizio Sarri would be a dead man before even the chain-smoking got to him.

Just watch this video clip below of Blues winger Callum Hudson-Odoi reacting to being snubbed by his manager, who made his third and final substitution against Cardiff City, but chose not to call on his highly-rated young attacker.

Hudson-Odoi has looked hugely promising whenever he’s played this season, but continues to struggle for much playing time in the big games.

It looks like the 18-year-old feels much the way most fans do about this bizarre continued snubbing from Sarri!