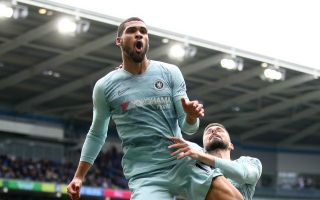 Chelsea midfielder Ruben Loftus-Cheek does occasionally look like he has something Frank Lampard-esque about his game, and he showed that in more ways than one today.

The England international hasn’t always been a regular for Chelsea this season, but did well today to snatch a late winner for the Blues in a dramatic 2-1 away victory at Cardiff City.

MORE: Video: Cowardly Jorginho at fault as Chelsea go a goal down to Cardiff

Loftus-Cheek headed in from close range in the 90th minute to help CFC grab all three points in controversial style, with Cesar Azpilicueta lucky to get away with being a mile offside for his equaliser.

And with that late, late winner, Loftus-Cheek became the first player since Frank Lampard all the way back in 2014 to score a 90th minute goal for the club in a Premier League game.

It’s hard to believe the west Londoners have gone that long without managing such a feat, but then one imagines it’s also not necessary for them that often as most of their wins will be quite comfortable.

Still, it’s a great record for Loftus-Cheek to match as he bids for more playing time at Chelsea.