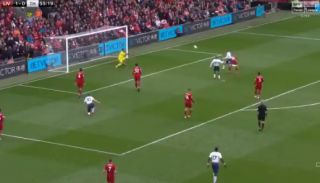 Liverpool left-back Andrew Robertson is having a great game against Tottenham today, setting up the opening goal for the Reds and blocking this effort from Harry Kane.

Watch below as the Scotland international throws himself in front of Kane’s shot when it looked a near-certain goal for Spurs at Anfield.

It remains 1-0 to Liverpool at the time of writing, and this block from Robertson could be as crucial as his cross to set up Roberto Firmino’s goal in the first half.

What a player the former Hull City man has become under Jurgen Klopp.