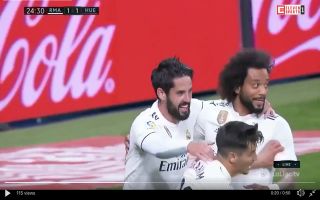 Real Madrid playmaker Isco was all smiles for the Spanish giants after he equalised against Huesca this evening, the playmaker has returned to the team under Zidane.

In the 24th minute of the tie, Madrid got themselves back on level terms after Karim Benzema battled for the ball and charged towards the Huesca goal.

The Frenchman played a lovely one-two with former Manchester City academy star Brahim Diaz and his shot at goal was parried away by the goalkeeper so Diaz played the ball across goal once more and Isco was on hand to tap the ball into the back of the net.

Karim Benzema shows his strength and powers towards goal, in the end Isco tucks it away ? pic.twitter.com/xkWuuB1DZA

Isco looks to have found his feet again at Real Madrid since Zinedine Zidane’s return as manager. The playmaker could guide the Spanish giants to success next season.

The star was forced into exile under Santiago Solari.