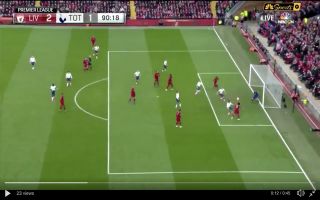 Liverpool have snatched a last-minute winner against Tottenham after Mohamed Salah’s header was turned into the back of the net by Toby Alderweireld.

In the 89th minute of the match, Trent Alexander-Arnold sent in a high, looping cross into the box, the delivery was met by the head of Salah at the far post, the Egyptian star’s effort was saved by Hugo Llloris but the Frenchman pushed the ball straight into the path of Toby Alderweireld and the ball spilled over the line.

You’ve made up for everything Salah. ??? pic.twitter.com/OECEi0bVLl

The Reds are now back on top of the league, they have a two point lead over Manchester City – who have a game in hand against Manchester United to play at the end of the month.