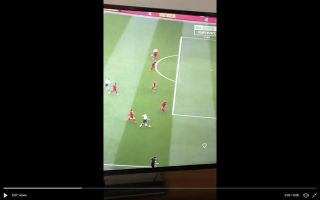 Tottenham superstar Harry Kane was blasted on social media for a mishit cross during his side’s 2-1 defeat to Liverpool today.

In the early stages of the match Kane produced a mishit cross that was picked up by some fans, the wayward cross was miles away from his teammate in the box and it ended up near the corner flag.

Kane turned it around in the second-half by producing an exquisite assist to get Tottenham back into the game in the 70th minute, take a look at Kane’s pass which led to Lucas Moura’s goal here.

Other than the wonderful assist, Liverpool’s defence can give themselves a pat on the back as they managed to keep the superstar quiet.

Check out Kane’s mishit cross below:

This Harry Kane deserves a mbe for this ….. fucking useless!!!!! pic.twitter.com/IZTXzrIQoJ

Check out some reaction to Kane’s performance below:

Was waiting for Harry Kane to claim that own goal but I’m not sure he was even playing.

Yo Van Djik locked off Harry Kane as well. Apart from that ball to Trippier he was a fucking mine

Tottenham’s hopes of finishing in the top four have taken a hit after they fell to a late defeat against the Reds today, Spurs will drop into fourth tomorrow if north London rivals Arsenal defeat Newcastle tomorrow evening.

“I don’t like it, I hope it doesn’t happen” – Liverpool star James Milner fights to save football in superb post-match interview
More Stories Harry Kane