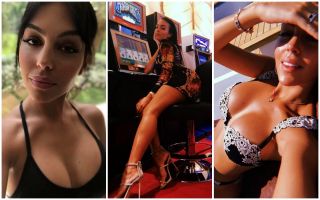 Georgina Rodriguez has responded amid claims that she could be pregnant with her second child with Juventus superstar Cristiano Ronaldo.

The pair have made a successful switch to Italy this year, as the Portuguese superstar continues to play a prominent role on the pitch in leading his new club towards major honours.

As for Rodriguez, she announced on her official Instagram page last month that she had landed a lingerie deal as her own burgeoning career continues, as she certainly appears to have an entrepreneurial streak in her to make her own success.

Rumours have surfaced in recent weeks though that she may be pregnant after certain pictures suggested that there was a bump, as noted by AS, but she has put that talk to bed by blaming it on too much pasta.

“I had been travelling from plane to plane and had eaten pasta for four days in a row,” she is quoted as saying by The Sun.

“I’m human. I retain liquids and my hormones influence me and I am still recovering from the previous birth.”

Given the wonderful cuisine in Italy, it’s no wonder that she may well have put on a bit more weight due to the food, and no can blame her or should judge her.

Having also had a child with Ronaldo in 2017, it’s undoubtedly got to be a difficult task continuing to remain in shape while looking after the family and supporting her man when in action.

With that in mind, it seems as though Ronaldo isn’t adding to his family just now, but who knows in the future as the pair continue to make sensible business moves off the pitch to provide for their growing clan.