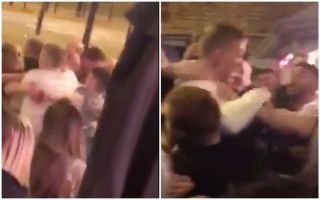 Everton have released a statement confirming that they are looking into an incident allegedly involving goalkeeper Jordan Pickford.

As seen in the videos below, it has been suggested that the England shot-stopper was involved in ugly scenes during a night out in Sunderland on Sunday.

SEE MORE: Video: “Shut the f**k up” – West Ham star’s furious reaction after being subbed off against Everton

It came on his day off after Everton’s win over West Ham United on Saturday, but question marks will be raised over his decision to head out for the night and getting involved in a seemingly heated confrontation with a member of the public.

Time will tell if any further action is taken, but with the Toffees now looking into it as a club matter, it certainly raises concern as far as Pickford is concerned that he could face repercussions for his actions.

“The club has been made aware of an alleged incident involving one of our players and we are looking into the matter,” the statement read, as per BBC Sport.

Of the three videos below, two show the incident unfolding, while another shows Pickford being goaded by the person filming.

That in turn would suggest that it probably wasn’t the smartest thing to go out and stay around that crowd although naturally an argument could be made that he doesn’t deserve being subjected to such treatment while out minding his own business and likely celebrating a win for his side.

What’s Pickford doing going out in Newcastle, especially after his bowlers against them the other week. Just asking for trouble pic.twitter.com/9ydWMSLfbQ