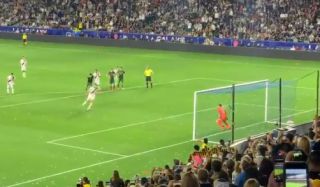 Zlatan Ibrahimovic had a decent night in the MLS, scoring a beautiful panenka penalty for LA Galaxy and almost netting what would have been one of the strikes of his career.

Watch below as the Swedish veteran chips home from the penalty spot in typically ice-cool style that has made him one of the finest forwards of his generation.

And now treat yourself to this audacious and acrobatic effort that hit the post, and that would have been one of Ibrahimovic’s best goals ever if it had gone in.

Zlatan Ibrahimovic manages to create a chance out of nothing! Pings off the post but not far off!