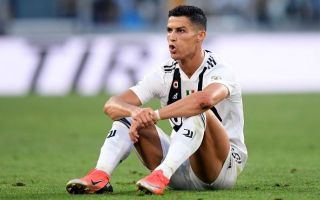 Juventus boss Massimiliano Allegri has delivered a positive update on Cristiano Ronaldo’s injury as he has suggested he’s progressing well.

The 34-year-old suffered the setback while on international duty with Portugal last week, and subsequently missed the win over Empoli at the weekend.

SEE MORE: Video: Cristiano Ronaldo looks in exceptional shape as he steps up recovery from injury

The Bianconeri laboured to a 1-0 victory in Turin, and that arguably showed just how important Ronaldo is as their Champions League quarter-final tie with Ajax is rapidly approaching.

The first leg takes place in Amsterdam on April 10, although Juve still face Cagliari and AC Milan before then.

However, the focus seems to be on getting Ronaldo ready for that clash in Europe, and Allegri sounded pretty optimistic when speaking to the media on Monday.

“The exam he had this morning revealed that the leg is much better. Then of course it depends how the player reacts and the eventual pain that he feels,” he is quoted as saying by Sky Sports.

If he needed to provide a reminder of his class and decisive ability in the Champions League, Ronaldo did so with a hat-trick last time out to turn their tie against Atletico Madrid on its head.

As Juventus continue to desperately try and end their wait for European glory, they’ll be hopeful their talisman can return to face Ajax and lead their charge.

Ronaldo has been in fine form since moving to Italy last summer, bagging 24 goals and 12 assists in 36 outings, and he’ll be equally as eager to try and recover in time to continue his pursuit of a sixth Champions League title.

It sounds like he is certainly making progress, but at the same time Juve will surely be desperate to avoid rushing him back and risking aggravating the problem as they won’t want to see him face a lengthier spell on the sidelines.

? Allegri: "@Cristiano is working to get back, we hope to have him ready for Ajax, but it will be difficult. @douglascosta is in good condition and should be available for that game. @SamiKhedira trained yesterday and could be back for Milan."#CagliariJuve #ForzaJuve pic.twitter.com/5tqCLAUCZN