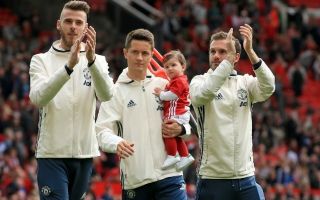 Manchester United midfielder Ander Herrera reportedly looks a step closer to a transfer to Paris Saint-Germain after fresh developments over his contract.

According to the Daily Mirror, Man Utd are unwilling to meet Herrera’s wage demands, with the Spaniard demanding as much as £200,000 a week to stay at Old Trafford.

This is a worrying development for Red Devils supporters, many of whom view Herrera as a real warrior on the pitch, which has long made him something of a fan-favourite at the club.

However, it now looks as though the 29-year-old is surely heading out of United, with his agent due to expire at the end of the season and PSG linked with him by the Mirror.

The Ligue 1 giants are no doubt better-placed to offer that kind of money to players like Herrera, who, for all his qualities, may not truly be worth that amount to United.

MUFC can probably replace Herrera in the transfer market, though of course it’s also far from ideal to lose an experienced performer who always gives 110% for the shirt.