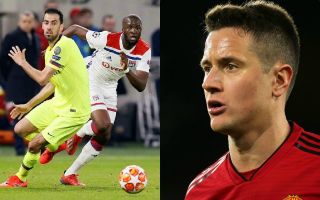 Manchester United fans seem largely in agreement that Lyon star Tanguy Ndombele should be the man to replace Ander Herrera as he agrees a free transfer to Paris Saint-Germain.

According to the Daily Record, the Spaniard has snubbed a contract offer from United to go to PSG next season, with his current deal at Old Trafford due to expire at the end of this season.

Herrera has been a great servant to Man Utd and could end up being a big miss for the club, though at the age of 29 it’s perhaps understandable that the club don’t necessarily want to be bullied into paying over the odds for his wages.

Many would also argue that, despite Herrera being a popular player due to his work rate and commitment, there are better all-round midfield players out there, and Ndombele is undoubtedly among them.

The France international has been immense for Lyon this season, and at the age of 22 has his best years still ahead of him.

Calciomercato have linked Ndombele with the likes of MUFC and Juventus in recent times, and one would expect other elite clubs to come in for him soon too.

Dear @Mike_Phelan_1, i know somebody who could be a perfect choice to replace Herrera if he really leaves. Should be a massive upgrade to our midfield, indeed. TANGUY NDOMBELE!??https://t.co/YeNB08DHaB

Herrera and Mata out – Ndombele and Aouar in? I’d take that #mufc

Herrera going on a free? Thats fine, just get Ndombele to replace him.

herrera signed a pre contract at psg, thats good for him to get his money. we just have to get a player more combatant and better than him – ndombele

If this is true and @AnderHerrera is demanding this I hope they let his contract run down and sign ndombele from lyon perfect replacement and alot younger https://t.co/5nmmDtpKBq

If Herrera leaves the Glazers have to dig deep into their pockets for a replacement, they have no faith in Fred so go out and buy ??