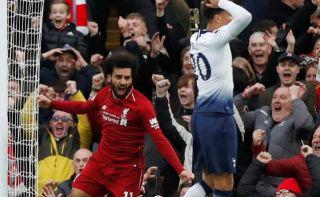 Watch the video below and keep an eye out for the brief shot of what looks like a match official celebrating the fact that the Reds have netted a late winner – and not particularly subtly either!

City fans can certainly be justified in questioning little incidents like this, with key moments continuing to go Liverpool’s way and keeping them hot on City’s tail in this season’s title race.

That said, it’s not like it’s the referee or linesman cheering, so is this guy’s opinion particularly important?