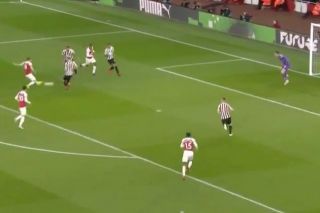 Aaron Ramsey opened the scoring for Arsenal with a classy finish in their clash with Newcastle United at the Emirates on Monday night.

The Welshman thought he had put the Gunners ahead just minutes earlier, but his effort was ruled out for a foul committed by Sokratis in the build up.

However, he didn’t have to wait long for another chance to get himself on the scoresheet, as he started and finished a move brilliantly to give Arsenal the lead, as seen in the video below.

A win would move Unai Emery’s men up into third place in the Premier League table, although the visitors have proven to be a threat in the opening half at the Emirates and so it remains to be seen if Arsenal can hold on to secure all three points and leapfrog rivals Tottenham in the standings.

GOAL!#AFC have the lead over #NUFC on #MNF as Aaron Ramsey sweeps home left-footed!