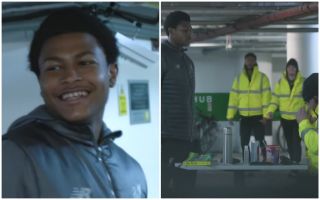 In the spirit of April Fools Day, Liverpool released a video on their official YouTube channel showing Rhian Brewster falling victim to a brilliant prank.

As seen below, the Reds youngster accompanies Joe Gomez to a supposed LFC TV shoot, unaware that his teammate is in on the prank along with Andy Robertson.

As the pair take their seat in a van just metres away, Brewster is left to be grilled by the security guard who does brilliantly to test his patience and amuse him to bring out a hilarious exchange between the pair.

Brewster, 19, comes agonisingly close to rumbling the whole prank though, as he almost spots a cameraman moving in a nearby car, but is quickly distracted by the security guard who also steps in to stop him closing in on the van.

Eventually, Gomez and Robertson emerge and have a laugh at the expense of their young teammate, who to his credit takes it really well.

We’ve seen stuff like this in the past from footballers, and based on the reaction its had, we certainly should get more of it as it shows a lighter side o those involved, albeit with a serious message from Nord VPN about security.