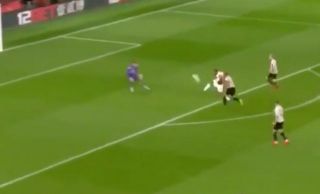 Arsenal front pair Pierre-Emerick Aubameyang and Alexandre Lacazette linked up brilliantly before the latter produced a superb finish to make it 2-0 against Newcastle.

Aaron Ramsey had given the Gunners the lead in the first half, but they were made to wait for another breakthrough until the latter stages of the encounter.

As seen in the video below, Lacazette initially flicked one round the corner for Aubameyang to nod on a pass back to him to latch onto, and after showing good pace to get in behind the Newcastle defence, the Frenchman produced an even better finish to lob the onrushing goalkeeper.

From start to finish it was a classy move from Arsenal, as Unai Emery’s side will move into third place in the Premier League table with a win, leapfrogging rivals Tottenham as they continue to build momentum heading into end of the season.

GOAL!#AFC should have the three points in the big as Lacazette dinks a chip over Dubravka!