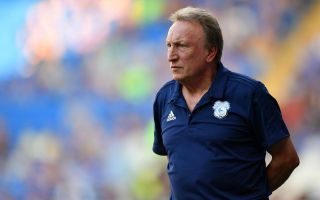 Cardiff City manager Neil Warnock has hinted he’s ready to play his under-23s in his club’s next game against Manchester City – and potentially play a part in spoiling Liverpool’s title hopes.

Cardiff travel to take on City at the Etihad Stadium on Wednesday evening, and look in urgent need of a result if they are to stay up this season.

That will no doubt be extremely challenging whatever team Warnock puts out against Pep Guardiola’s reigning champions, but it could be made even worse for title challengers Liverpool as the Bluebirds boss has hinted he’s ready to pack it in and give his youngsters a go.

“We keep getting knock-backs. I will probably play the U23s on Wednesday against Manchester City and try to keep it down to 10 or 11,” he was quoted by the Sun.

“It doesn’t matter who you play at the minute, it is who has a flag in his hand and who has a whistle.”

It’s unclear if Warnock was being entirely serious with this suggestion, with the 70-year-old clearly emotional after his side’s latest defeat to Chelsea at the weekend.

Cardiff had gone 1-0 up against the Blues, only to concede two late goals, one of which was offside, while a number of other refereeing decisions went against them.