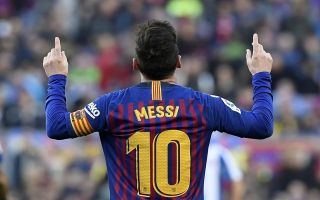 Barcelona face a decisive month in April, but coach Ernesto Valverde has argued that it’s almost impossible to find the right time to rest Lionel Messi.

The 31-year-old has been in sensational form again so far this season, scoring an incredible 41 goals and providing 21 assists in just 38 appearances across all competitions.

With the Catalan giants going for a treble this season with the La Liga title, Copa del Rey and Champions League still objectives, they will now face a make or break month or so to determine just how successful they are.

When asked about the possibility of resting Messi as they prepare to face Villarreal on Tuesday night, Valverde conceded that it’s difficult for him to decide when is the right time to rest his talisman.

“There is never a suitable scenario to rest a player like Leo, but we’ll see tomorrow,” he told the media on Monday, as noted by Mundo Deportivo.

Given Barcelona face title rivals Atletico Madrid on Saturday night, which is followed by the first leg of their Champions League quarter-final tie with Manchester United next Wednesday, the Villarreal game is surely the perfect opportunity to allow Messi to rest.

They currently boast a 10-point lead at the top of the La Liga table, and so it would surely make sense to ensure that Messi is fully fit and well rested for such crunch encounters.

Time will tell if Valverde does that though, as that has undoubtedly been a widely criticised aspect of his management at the Nou Camp, in that the key stalwarts in the side are rarely rested which arguably cost them at the end of last season in terms of their Champions League aspirations.