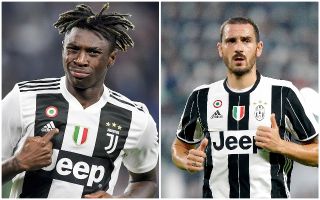 Leonardo Bonucci faced a major backlash after the Juventus stalwart suggested that teammate Moise Kean was partly to blame for antagonising Cagliari fans.

The Bianconeri secured a 2-0 win in Sardinia on Tuesday night, but the game was marred by racist abuse being directed towards the young Juve forward.

He responded in the right manner with the second goal to wrap up the victory before standing in front of the Cagliari fans with his arms outstretched before his teammates moved him away.

Blaise Matuidi was also caught on camera and rightly looked infuriated with the chants, and so there were certainly different reactions amongst the Juventus squad.

However, Bonucci has sparked an angry response from fans in general after his controversial comments as noted below, where he suggests that Kean shouldn’t have celebrated in the way that he did and that he is somehow partly to blame.

“Kean knows that when he scores a goal, he has to focus on celebrating with his teammates. He knows he could’ve done something differently too,” Bonucci told Sky Sport Italia, as noted by Football Italia.

“There were racist jeers after the goal, Blaise heard it and was angered. I think the blame is 50-50, because Moise shouldn’t have done that and the Curva should not have reacted that way.

“We are professionals, we have to set the example and not provoke anyone.”

On one hand, you can see where Bonucci is coming from as more to the point, Kean could have put himself in danger of being struck by something thrown from the crowd for example and so winding the ‘fans’ up could have led to a more serious situation.

Nevertheless, racism simply has no place in or out of the stadium, and it’s those responsible for the disgusting chants who should be blamed entirely and identified to ensure that action can be taken.

It remains to be seen how Bonucci’s comments are taken in the dressing room, but based on the comments below, it hasn’t gone down well with fans at all.

I hope this is a misquote… pic.twitter.com/4gbw8HZgNX

He’s not the brightest person

Bonucci lost points with me. Kean had every right to defend himself and he deserves support from his team.

Imagine being teammates with this tool

Bruh I wanna slap this man in the face

Talks ongoing: Everton and PSG locked in negotiations over transfer of promising attacker