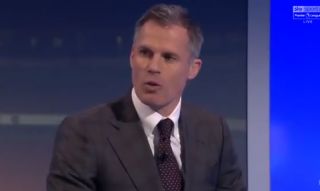 Liverpool legend Jamie Carragher is still backing Arsenal to drop out of the top four despite going above rivals Tottenham into third last night.

The Gunners beat Newcastle 2-0 to go two points above both Spurs and Manchester United, though Carragher still believes it is those two teams who will end up joining Liverpool and Manchester City in the Champions League places.

"With their away form, I'm not too sure"

Discussing the top four race on Sky Sports in the video clip above, Carragher explained he was still worried about Arsenal’s away form this season.

Unai Emery’s side have been formidable at home, but face tricky potential fixtures on the road at the likes of Everton and Leicester City that they don’t look like favourites in on current form.