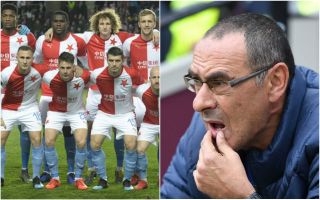 Chelsea have been trolled by Sparta Prague on Twitter after a bit of a mix-up saw the Blues tell their fans they were playing them this season.

Chelsea are, however, up against Slavia Prague in the quarter-finals of the Europa League, which is a bit embarrassing.

Hi guys @ChelseaFC, we completely understand you are confused, since we are the most famous and most succesful club from Prague. But this time you play against Slavia, sorry…:( pic.twitter.com/z0EzQ9IhM3

See above as Slavia Prague point out Chelsea’s error, with a screen grab of the original mistake, which has since been corrected by the club.

Maurizio Sarri’s side will be hoping to win this competition this season as they struggle to earn Champions League qualification through the top four, but it would now be extremely humiliating if they ended up getting knocked out by a club whom they mistook for another team.