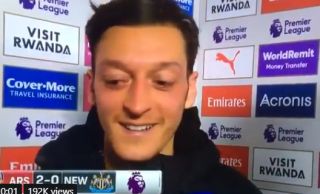 Arsenal star Mesut Ozil could not help breaking out into a smile as he discussed his club overtaking north London rivals Tottenham in the Premier League table.

The Gunners beat Newcastle 2-0 last night to move up into third place, while Spurs suffered another bad result, losing to Liverpool due to a calamitous late own goal from Toby Alderweireld.

Lol Mesut Ozil can’t help but laugh when talking about being above Tottenham pic.twitter.com/9WRmYKIKRv

Some may question Ozil’s loyalty and commitment, but clips like this show how much of a Gooner he is, as he clearly enjoyed the feeling of being the top dog in north London once again.

Arsenal became used to always finishing above Tottenham in the table, but have now not done so since the 2015/16 season, so will hope they can maintain this current run towards securing Champions League football and some local pride.