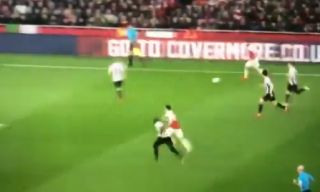 Arsenal defender Shkodran Mustafi was guilty of producing a terrible cross in the win over Newcastle United on Monday night, but he has seen the funny side of it.

Importantly, the three points lifted the Gunners up into third place in the Premier League table with just seven games remaining, as they leapfrogged rivals Tottenham and Manchester United in the all-important scrap for a top-four finish.

However, as seen in the video below, Mustafi didn’t escape ridicule after attempting what can only be described as one of the worst crosses fans have probably seen at the Emirates for a while.

It’s a shame as he had done really well up until that point to get in a dangerous crossing position, but the delivery unfortunately didn’t match the build-up.

To his credit though, and perhaps he can now laugh at himself given Arsenal won the game, he has seen the funny side of it and mocked himself over the incident with his post as seen below which was re-posted by the Arsenal account.

It suggests that his delivery has made its way to the moon, and judging from the trajectory it took in the video below, it’s probably not too far off being accurate.

In his defence, he’s never really fully convinced as a right back or in general when he gets this far up the pitch, and so he’d probably be well advised to continue to focus on improving in his more natural role.

Mustafi turning from Messi to Mustafipic.twitter.com/c2lSj6NR5c