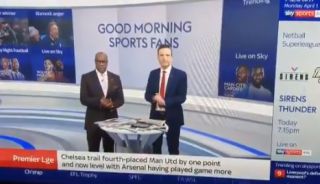 A Liverpool fan has shared a video of a Sky Sports News presenter genuinely saying ‘Come on City’ when discussing the Premier League champions’ next game against Cardiff.

Pep Guardiola’s side can go back on top of the Premier League with a win at the Etihad Stadium, in what is looking like being a title race that could go right down to the wire this season.

Liverpool are currently top having played a game extra, but City will be big favourites to beat Cardiff in midweek.

Many neutrals seem to be rooting against the Reds, whose fan-base have a reputation for being a bit, well, annoying.

Still, should a supposedly neutral voice presenting a sports programme be so open about wanting to see City get the better of Liverpool? Watch the clip above and decide for yourselves.