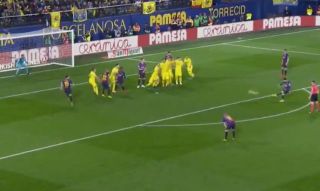 Barcelona appeared to be staring at a defeat against Villarreal on Tuesday night, but Lionel Messi had other ideas to help them secure a 4-4 draw.

The Catalan giants were 4-2 down heading into the last minute of normal time, although Villarreal had been reduced to 10 men to set up a frantic finish.

Their nerves were multiplied when Messi stepped up and produced this moment of magic as seen in the video below, as the 31-year-old delivered when his side needed him to despite being left on the bench by coach Ernesto Valverde who opted to rotate and rest his key players.

That in turn gave Barcelona hope of snatching a point, and that’s exactly what they did with Luis Suarez scoring in the 93rd minute to claim a share of the spoils.

The Uruguayan stalwart produced an exceptional finish of his own, as seen below, drilling in an equaliser in dramatic fashion.

As a result, Barcelona have still suffered just two defeats in the league all season, and remain eight points clear of title rivals Atletico Madrid ahead of facing them at the Nou Camp this weekend.

However, Tuesday night will be seen as a point gained after their heroic late display, with Messi unsurprisingly at the heart of it.

own by la liga

Please follow : @goalstv3 to enjoy all goals on time ?#VillarrealBarça