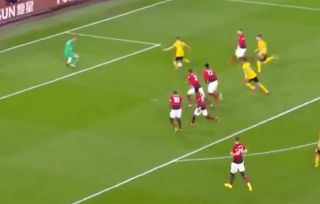 Man Utd failed to hang onto their lead over Wolves for long on Tuesday night, with Diogo Jota bringing his side level after a mistake from Fred.

Scott McTominay had put the visitors ahead at Molineux with a superb strike which was his first goal for the club, but unfortunately for him, it was wiped out soon after.

As seen in the video below, Man Utd passed out from the back but Fred was unable to control David De Gea’s pass and gave possession away in a very dangerous position.

While it could be argued that De Gea shouldn’t have gone short in that situation in the first place, his teammate surely has to do better on the ball.

Nevertheless, that was their downfall as after a nice through ball, Jota made a clever run in behind and lashed home an equaliser for the hosts after having also scored against United in their FA Cup encounter last month.

After such a bright start, United have it all to do again in the all-important race for a top four finish in the Premier League this season as they can’t afford to drop points.

Wolves are back on level terms as Jota capitalises on Fred's poor touch!

Please follow : @goalstv3 to enjoy all goals on time ?#WOLMUN