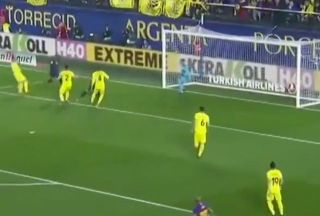 Malcom was handed a rare start for Barcelona on Tuesday night, and he grabbed his opportunity with both hands with a decisive role against Villarreal.

The Brazilian ace has made just 16 appearances this season to date, but he ensured that his 17th was a memorable one as he set up Philippe Coutinho for Barcelona’s opener.

As seen in the video, there was some wonderful build-up play from the Catalan giants to carve Villarreal open, with Malcom making it easy for his compatriot to apply the finishing touch.

However, things were set to get even better for him as he headed home Barcelona’s second not long after, which was his first La Liga goal for the club.

Having scored twice in the Copa del Rey and once in the Champions League, the 22-year-old has been forced to wait in the league, but he put an end to that with a well-taken header.

It wasn’t enough to see off Villarreal though, as the hosts launched a comeback as they dragged themselves level just after half time having been two goals down.

Malcom netted his first #LaLiga goal for Barcelona, and he's got an assist too!

Villarreal have a goal back now though… game on! pic.twitter.com/h7xKZUYVe4

Video: Malcom left stunned as he gets special delivery from Zenit via a drone
More Stories Malcom