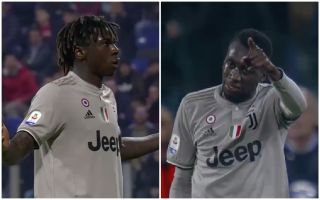 Moise Kean wrapped up a 2-0 win for Juventus at Cagliari on Tuesday night, but the game was marred by disgraceful racist chants from the stands.

The 19-year-old continues to impress this season, as amid an injury crisis for Juve boss Massimiliano Allegri, the youngster continues to produce for the Bianconeri.

That’s now five goals in nine games so far this season, and it certainly seems as though he has a very bright future ahead of him.

However, he had to deal with racist chants from a section of the Cagliari supporters in midweek, and as seen in the video below, he took the opportunity after scoring to stand in front of those guilty of such disgraceful behaviour and savoured the moment.

Teammate Blaise Matuidi had an altogether different reaction though, as the Frenchman was livid at one stage over the treatment they were receiving from the Cagliari fans and was seen remonstrating with both Allegri and the referee.

As seen below, Cagliari ace Luca Ceppitelli was also captured on camera trying to settle the fans down and urging them to stop with their insults, but action will surely have to be taken by the authorities.

It remains to be seen whether that’s also from the club who must surely take steps to ban those in question, or if the FIGC get involved and take a hard line by also punishing Cagliari for the behaviour of their fans.

The monkey chants against Moise Kean got so bad that Cagliari's captain had to step in and ask their fans to stop. SHAMEFUL.#CagliariJuve pic.twitter.com/AKsrvMPqVV

Talks ongoing: Everton and PSG locked in negotiations over transfer of promising attacker