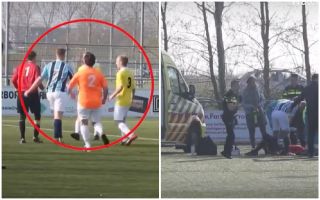 Things got far too heated in this clash in Holland, with a linesman seen knocking a player out unconscious after a brawl had erupted.

As noted by The Sun, Lennert Bohmer was arrested after he can be seen running up to the goalkeeper and landing a punch flush in his face to send him to the ground.

Worryingly, it appears as though he is unconscious at first as he doesn’t move, but after receiving treatment and being taken to hospital, it’s hoped that he hasn’t suffered any serious injury.

The shocking incident occurred in a match between Hoofddorp club VV UNO and S.V. Geel-Wit in Holland, and so although it isn’t a high profile encounter, action must be taken and checks made in future to ensure that officials are cleared to take charge.

In this case, the man in question clearly wasn’t fit for his role, and so it remains to be seen what the outcome is of a police investigation into the matter as this will surely be the last game he’s involved in while he’ll be lucky to escape more serious punishment outside of football.