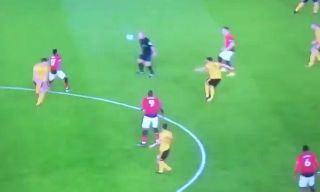 Man Utd were involved in a fascinating clash with Wolves on Tuesday night, and referee Mike Dean even got involved in proceedings.

Goals from Scott McTominay and Diogo Jota ensured that the two sides went into half-time level, but there was one other man who emerged as a talking point.

As seen in the video below, the official couldn’t get himself out the way in time and ended up playing a one-two with Fred, with the United move continuing to flow thereafter.

Judging from the tweets below, it’s fair to say that Dean isn’t the most popular of referees out there, as many were left furious and rather unimpressed with his officiating through the first half as he reached a personal landmark with his 100th red card after sending off Ashley Young after the break.

However, credit where credit is due as this was a decent touch and Fred would certainly have appreciated getting the ball back and getting on with the move rather than giving up possession cheaply, as he did for the home side’s equaliser.

Tika-Taka football from Dean and Fred…

? Mike Dean is the first referee to show 100 red cards in PL history

His first was to Nolberto Solano in April 2001, whilst Ashley Young in the 4th Man Utd player to feature in that number, after Matic, Mata & Rafael pic.twitter.com/IG842Yp29H

Mike Dean has now handed out 100 red cards in the Premier League!