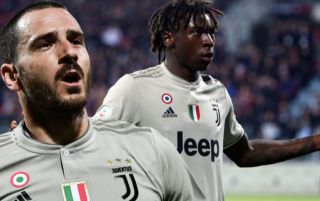 Juventus and Italy star Leonardo Bonucci has issued a new statement on his personal Instagram account regarding his comments on the racist abuse Moise Kean suffered during the Old Lady’s 2-0 win over Cagliari.

Kean was the subject of racist abuse during his side’s 2-0 won over Cagliari on Tuesday, with the player’s celebration after scoring in the match leading to Bonucci commenting on the situation.

Moise Kean was victim of racist chants at Calgari tonight. Scored. Celebrated in front of the fans who booed him. Matuidi has gone to back him but post FT Bonucci says he "shouldn't have done that". Still a long way to go. pic.twitter.com/O9rTM3XzEs

According to Football Italia, Bonucci stated that “there were racist jeers after the goal, Blaise heard it and was angered. I think the blame is 50-50, because Moise shouldn’t have done that”.

These comments have seen a whole host of footballers slate Bonucci, something that seems to have lead to the player himself commenting on his comments this evening.

Bonucci took to his Instagram account to speak out about his thoughts on his comments, stating that “I want to clarify my feelings. Yesterday I was interviewed right at the end of the game, and my words have been clearly misunderstood, probably because I was too hasty in the way I expressed my thoughts.”

Dopo 24 ore desidero chiarire il mio pensiero. Ieri sera ho parlato alla fine della partita e mi sono espresso in modo evidentemente troppo sbrigativo, che è stato male interpretato su un argomento per il quale non basterebbero ore e per il quale si lotta da anni. Condanno ogni forma di razzismo e discriminazione. Certi atteggiamenti sono sempre ingiustificabili e su questo non ci possono essere fraintendimenti. // After 24 hours I want to clarify my feelings. Yesterday I was interviewed right at the end of the game, and my words have been clearly misunderstood, probably because I was too hasty in the way I expressed my thoughts. Hours and years wouldn't be enough to talk about this topic. I firmly condemn all forms of racism and discrimination. The abuses are not acceptable at all and this must not be misunderstood.

Racism in football is a huge problem, and Bonucci’s original comments on Kean’s celebration were out of order and simply incorrect.

Despite his attempts to amend his actions, fans and players alike won’t forget Bonucci’s original comments on the situations, ones that will not help football and it’s battle to kick racism out of the sport once and for all.