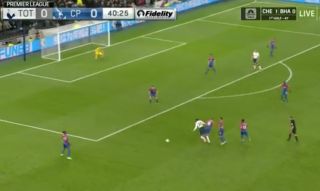 Fans flocked to Twitter to claim that Spurs midfielder Dele Alli should’ve been sent off for a dive in the north London side’s clash against Crystal Palace.

Tonight’s game against the Eagles is Tottenham’s first in their brand new stadium, with Mauricio Pochettino’s side looking to start life off at their news home with a win.

Spurs went into half time drawing 0-0 with Palace, with the club looking for a way past their opponents’ defence in order to take home all three points from tonight’s clash.

And Tottenham’s attempts at doing this could’ve been handed a blow in the first half, with midfield star Alli lucky to escape a second yellow card for a dive.

Having already been on a booking, Alli skipped past a Palace midfielder, going down in the process, with referee Andre Marriner failing to hand the Englishman a second yellow card and his marching orders.

This has seen a number of fans take to Twitter to claim that the midfielder should’ve been shown a red card in the first half, something we somewhat agree with going off of the footage above.

Dele Alli dives, what a surprise; and the commentator says nothing. Co-comms called him out. Dele should be off.

Alli should be off.

Alli should be sent off just as I predicted

Dive by Dele Alli. Should be off.

Can confirm alli should be sent off. Second yellow for a dive not given.

Ref bottled it there. Alli should’ve been off with a second yellow for that dive. #TOTCRY

Stone wall second yellow for an Alli dive but the ref bottles it on Tottenham’s big day. Shocking.#CPFC