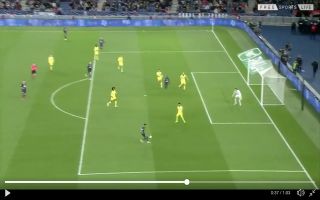 PSG star Dani Alves showed fans that he’s still got the magic to get fans off their seats when he scored a beautiful lob in the final moments of the game vs Nantes.

In the final moments of the French Cup tie, midfielder Marco Verratti played an inch-perfect long pass into Alves and the former Barcelona star controlled the ball expertly with his chest before firing a wonderful side-foot half-volley lob into the back of the net.

The goalkeeper couldn’t believe what had just happened and was left red-faced and rooted to his spot. Alves’ lovely goal even managed to get superstar Neymar out of his seat. Neymar has been battling with an injury but is nearing a return to full fitness.

Check out the stunning goal below:

A truly astonishing strike from Alves.