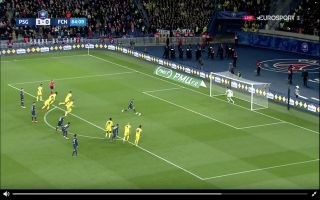 Kylian Mbappe experienced an extremely bizarre, whirlwind game vs Nantes this evening. Twenty minutes after missing a penalty retake the star scored from the spot.

Mbappe was embroiled in controversy in the early stages of the French Cup tie after his embarrassing dive in a bid to win a penalty. Take a look here.

In the 65th minute of the match the Frenchman had the chance to make up for his woes when the Parisians were awarded a penalty, after scoring from the spot, the referee ordered a retake and this time Mbappe’s spot-kick was saved.

Take a look at the penalty drama here.

Just when it looked like a goal would evade the World Cup winner, teammate Dani Alves won a penalty after he was hacked down in the box. Mbappe stepped up for the third time in the match and went the same way as his earlier penalty – which hit the back of the net, before the retake.

Check out Mbappe’s penalty below:

I didn’t think Mbappe’s game could get any more dramatic, the star has gone completely full circle tonight.