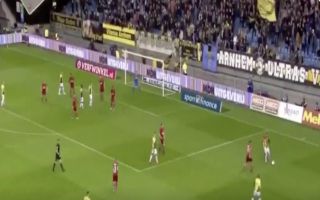 The Norwegian starlet is currently on a season-long loan at the Eredivisie club, taking in the opportunity for regular football ahead of a summer return to the Santiago Bernabeu.

The 20-year-old has been a key figure in the Vitesse starting XI this term, contributing five goals and six assists in 25 league appearances, while also developing a confident streak in possession.

The Madrid youngster left two AZ defenders for dead with an outrageous piece of skill in front of home fans during a 2-2 draw at the start of the week, keeping the ball under control with a roulette turn despite having his back to the opposition box.

Check out a clip of Odegaard in full flow below via Twitter, as he reminds the world exactly why Madrid decided to purchase him as a teenager back in 2015.

? • Outrageous piece of skill from Martin Ødegaard, who is rumored to be on Ajax’ transfer shortlist. pic.twitter.com/LcH5F51POB

Martin Ødegaard is too good for this league. ? pic.twitter.com/No8Q5ot64D