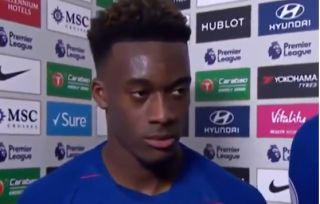 Chelsea starlet Callum Hudson-Odoi has revealed what instructions Maurizio Sarri gave him before he made his full Premier League debut against Brighton last night.

The England international impressed in his first start at this level, grabbing an assist in the first half for Olivier Giroud’s opening goal.

Ruben Loftus-Cheek says that him and Callum Hudson-Odoi have spent years of hard work to start in a Premier League game together.

Hudson-Odoi has already shown his immense talent in cup games and the Europa League this season, which saw him called up for Gareth Southgate’s senior England squad in the latest round of international matches.

Discussing how last night went, the 18-year-old explained that Sarri told him to just play his game and express himself against Brighton, which he clearly seemed to do.

Blues fans will now be hoping to see a lot more of this very talented young man in the Premier League between now and the end of the season.