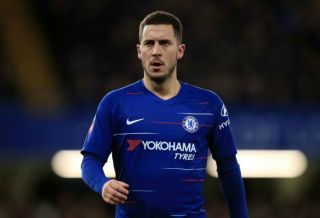 To his credit, Eden Hazard was respectful and complementary towards Tottenham when speaking about them on Thursday, but the Chelsea ace couldn’t help but have a swipe at their rivals too.

Optimism is at an all-time high for Spurs currently, as having played their first game at their new stadium on Wednesday night, it promises to help them continue to establish themselves as a major threat in Europe.

While they haven’t been able to continue their progress under Mauricio Pochettino to the top level and in turn winning trophies, the Argentine tactician has done a tremendous job given he hasn’t had the same spending power as their rivals in the Premier League.

The stadium will be seen as a step in the right direction to help them do that, and while Hazard has credited Tottenham, he insists that there is still a major difference between them and Chelsea, and that’s the fact that the Blues having been busy winning trophies in recent years.

“Tottenham for two or three years have been one of the best teams in England. That is for sure. We are Chelsea, and it is a big derby,” he is quoted as saying by The Sun.

“I don’t like that to be fair but we have to accept it. For the Premier League it is good – new stadium, they have top players.

“But at the end, you know Chelsea we won a lot of trophies, they have not, so I hope this continues.”

Time will tell what impact the fact that the stadium is now complete will have on the transfer budget this summer, but as they continue to battle for a top-four finish in the Premier League this season, there is still a danger Spurs’ ongoing failure to end their wait for silverware could hinder them both in terms of signings and keeping their best players regardless of their new home.