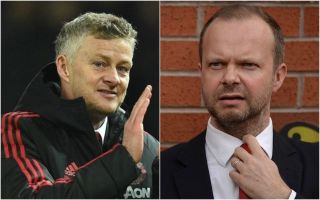 Manchester United manager Ole Gunnar Solskjaer has reportedly failed to agree on a summer transfer budget with the club’s board.

According to the Metro, the new Red Devils boss held meetings with the likes of Ed Woodward about summer spending, but failed to settle on a figure due to the ongoing uncertainty about securing Champions League qualification for next season.

Results in the last few days have seen Man Utd drop to 6th in the Premier League, though they’re still only three points behind Tottenham in third.

It’s hard to predict how the battle for the top four will go in the coming weeks, but that could determine in a big way how much United get in their budget.

According to the Metro, Champions League qualification could add as much as £60million to Solskjaer’s transfer kitty, while there’s also no doubt that playing in Europe’s biggest club competition helps attract the biggest names.

United have been in and out of the Champions League in recent times, finishing 7th under David Moyes in 2013/14 and 5th under Louis van Gaal two years later.

MUFC won’t want to be spending too much more time in the Europa League, and fans will be desperate to see them both playing at the highest level next season and being able to compete with their rivals for the best players.