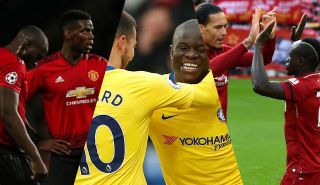 Real Madrid are reportedly ready to sell players this summer in the hope of raising around €230million to help them sign top targets such as Manchester United midfielder Paul Pogba, Chelsea forward Eden Hazard and Liverpool front-man Sadio Mane.

The Spanish giants look in need of a major overhaul ahead of next season after a hugely disappointing 2018/19 campaign in which they’ve suffered following Cristiano Ronaldo’s exit last summer, as well as the departure of manager Zinedine Zidane before his return after ten months.

With a history of splashing out huge sums of money on ‘Galactico’ signings, it is little surprise to see Real now being linked with big names like Pogba, Hazard and Mane by Diario Gol.

The report suggests, however, that this will involve a necessary fire-sale first, with big names like Karim Benzema, Gareth Bale, Toni Kroos and Isco among those available.

It seems time for a fresh start at the Bernabeu despite all that these big names have contributed to the club’s recent success, and if they could somehow land all three of Pogba, Hazard and Mane they would surely be much stronger for it.

It would be a huge blow for these clubs to lose such star players, however, with all three in need of keeping players like this if they are to close the gap on Manchester City in next season’s title race.