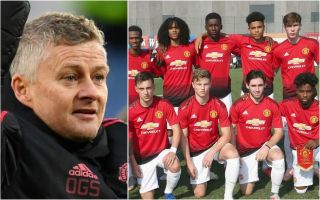 Manchester United manager Ole Gunnar Solskjaer is reportedly ready to keep on promoting the club’s academy youngsters next season alongside his transfer plans for the summer.

The Norwegian tactician recently got given the United job on a permanent basis following a hugely impressive spell as interim boss, during which he achieved good results, stylish attacking performances, and the promotion of home-grown players in keeping with the club’s traditions.

The likes of Tahith Chong, James Garner, Angel Gomes and Mason Greenwood have moved that bit closer to the first-team under Solskjaer, and it seems that that policy could continue next season.

In general, it seems Solskjaer is eager to put together an exciting young side as Jadon Sancho and Aaron Wan-Bissaka are among his top transfer targets, according to the Telegraph.

Sancho has been linked with Man Utd a lot recently, with the most recent report from the Independent stating the £100million-rated 19-year-old is seen as an ideal Alexis Sanchez replacement by the club.

Meanwhile, a further £35m could be spent on 21-year-old Crystal Palace defender Wan-Bissaka after his impressive season in the Premier League, according to the Mail.

United fans would surely love to see Solskjaer building around youth in this way, with a combination of the best talent from elsewhere brought in to join some exciting talents coming through the academy.