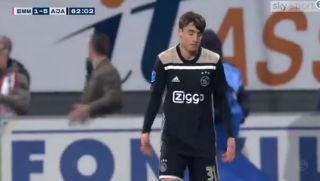 Ajax defender Nicolas Tagliafico just shrugged after scoring one of the most hilarious own goals you’ll see this season.

Watch below as this time-wasting from the Amsterdam giants goes horribly wrong, with Tagliafico just passing the ball all the way back past his own goalkeeper.

Nicolas Tagliafico scored an own goal but Ajax still ran out 5-2 winners against struggling Emmen in the Eredivisie. pic.twitter.com/mddt26QK2h

To be fair, Ajax were 5-0 up before this huge mistake, so maybe it’s not a big surprise Tagliafico was able to shrug it off a bit.

The game ended 5-2, though, so it just shows that you can never be entirely comfortable, even with a big lead.