Arsenal’s 2018-19 campaign has seen them record the highest conversion rate of shots on goal for any team in any single Premier League season since 1996.

The Gunners are currently fourth in the Premier League table, having played a game less than all their major rivals for a spot in next season’s Champions League.

Unai Emery was drafted in to replace legendary boss Arsene Wenger last summer and although he has endured a turbulent debut year at the Emirates Stadium, it seems that he is already heading in the right direction.

Arsenal have won five of their last six Premier League matches and are many people’s favourites to finish third come May, having chased down arch-rivals Tottenham in recent months.

A place at Europe’s elite table next season would surely satisfy the club’s supporters, but Emery is also on course to guide the team to silverware in the Europa League, with a quarterfinal tie against Napoli to look forward to this month.

According to Opta Stats, one incredible statistic highlights the impact the Spanish boss has had during his short time in north London, with Arsenal currently enjoying one of the most clinical seasons in Premier League history.

Arsenal’s conversion rate of 23.1% of shots resulting in goals this season (excluding blocked shots) is the highest of any team in any Premier League campaign since Opta first started analysing games in 1996.

Second is Man City from last season at 20.7%

The Gunners have converted 23.1% of their shots on goal this term – excluding blocked efforts – which is the highest of any team in any top-flight season since 1996, which is when Opta first began analysing matches.

To put that statistic into perspective, the second highest entry in the records is Manchester City with 20.7%, which they posted during their 100-point title-winning campaign last year. 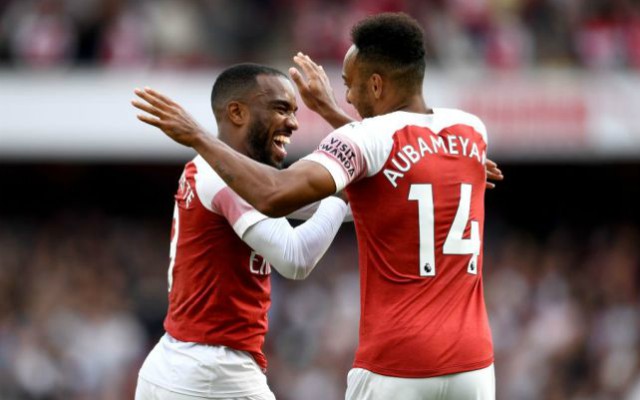 lacazette & aubameyang in action for arsenal

Front two Pierre Emerick Aubameyang and Alexandre Lacazette have shared 30 goals between them, with signs that they could forge a partnership for the ages in the coming years.

The 2019-20 campaign could be an exciting one for Arsenal if they can build a sterner defence to back up their attack, which is clearly one of the most formidable in English football and Emery could well be the man to restore the glory days at the club if he continues on this current trajectory.