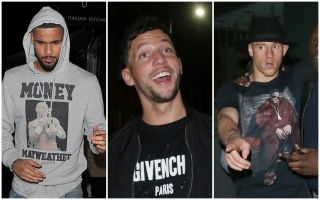 After back-to-back wins in the Premier League, the Chelsea squad seemingly took time to enjoy themselves on a night out on Thursday.

Wins over Cardiff City and Brighton have lifted the Blues into fifth place in the table, level on points with Arsenal in the race for a top-four finish.

Coupled with the fact that they’re not in action until Monday night when they host West Ham United at Stamford Bridge, it appears as though they took advantage of their time off.

According to The Daily Mail, several members of the Chelsea squad went to see Drake perform at the O2 Arena, and followed that up with a night out at west London club Raffles.

It’s added that while many departed in the early hours, Barkley was one of the last to leave at around 5am, and so it sounds as though he enjoyed himself and the pictures in the link below would suggest that he did too.

Importantly, it’s noted in the report above that Maurizio Sarri had given the squad a day off and so there doesn’t appear to be any problem with them letting their hair down, but they’ll have to get back to it next week as they return to Europa League duty just three days after that West Ham clash.

There will certainly be no time for big nights out as Chelsea will desperately continue to fight for a top-four finish to seal their return to the Champions League next season, but they may well be feeling recharged and refreshed, although perhaps Barkley needed a bit of a lie-in this morning.

I thought Ross Barkley had all his tattoos removed?

Earning £100k a week & with no football to worry about, Danny looks like he's done more than Drink Water.
What a life he's having as a Chelsea 'player'.
Where's that Director of Football at Stamford Bridge when you need one?
???? pic.twitter.com/vmIa0YXIHg

Pictured are Chelsea players enjoying a night out ahead of Monday's game vs West Ham United last night.

No pictures of N'Golo yet. We are thinking it was a quiet night in playing bingo for the General. ?? pic.twitter.com/UfhxFBEx3k

Chelsea spent £180m on these eight players who are all out on loan, some haven’t played for the club for years
More Stories Danny Drinkwater Gary Cahill Ross Barkley Ruben Loftus-Cheek