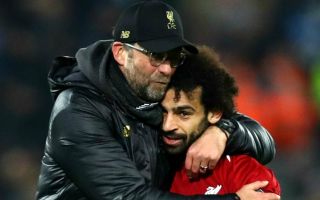 Mohamed Salah scored a brilliant individual goal for Liverpool at Southampton on Friday night, which was his 50th Premier League goal in a Reds shirt.

The 26-year-old has been a fundamental figure since joining the Merseyside giants from Roma, scoring key goals and emerging as a real talisman in Jurgen Klopp’s side.

After Shane Long had scored an early goal for Southampton on Friday night, nerves would have been building from a Liverpool perspective as they had the chance to go back top of the Premier League table by leapfrogging title rivals Manchester City.

Naby Keita sparked the comeback, but Salah stepped up in the second half to produce a moment of brilliance to give Liverpool the lead as Jordan Henderson added a third just minutes later to wrap up the victory.

As noted in the club’s tweet below though, not only was that Salah’s 50th Premier League goal in a Liverpool shirt, but he reached the landmark in the fewest amount of games for any player as he did it in 69 games, beating the previous record held by Fernando Torres at 72 games.

Liverpool will certainly hope that he can add a few more before the season is over to lead them to title glory as this was undoubtedly another huge win and a potential step towards winning the title this season.

Man City are in FA Cup action this weekend, and so the pressure will be on their shoulders now to produce a response next time out with Liverpool getting the all-important points on the board already.

? Games taken to net 50 @premierleague goals for the Reds…