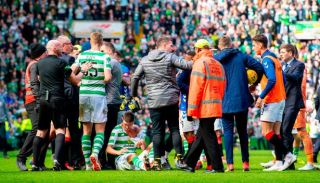 Rangers boss Steven Gerrard has accepted a one-game touchline ban for comments he made to referee Bobby Madden after the clash with Celtic.

In a heated battle between the two old rivals last Sunday, Celtic emerged as 2-1 winners to extend their lead at the top of the table to 13 points.

However, it didn’t pass with controversy and flash points as both Alfredo Morelos and Andy Halliday were sent off and now Gerrard has also been hit with disciplinary action for his reaction to the officials after the game, as noted by BBC Sport.

That in turn means that he will have to be content with a place in the stands for the encounter with Motherwell on Sunday, as the club as a whole look to clear their heads and continue to solidify their spot in second place.

They did return to winning ways against Hearts with a 3-0 victory on Wednesday, and Gerrard will undoubtedly hope to see more of the same regardless of whether his involvement is limited.

Meanwhile, the report also adds that Liverpool loanee Ryan Kent will serve a two-game suspension for lashing out at Scott Brown, while Morelos is out for another three games as they’ve been made to pay the cost of their actions.

If that wasn’t enough, the SFA have also charged both clubs over their inability to control the players at full-time as things threatened to boil over once again.

Next Everton manager: Steven Gerrard and another Liverpool legend in shock link to replace Carlo Ancelotti