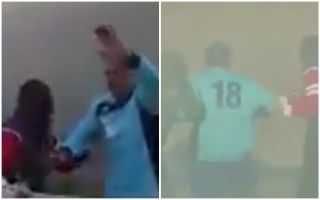 In one of the most bizarre ways to end your playing career, Ignazio Barbagallo made quite the statement with his staged kidnapping during his final game.

It happened during a Sicily League third-tier game involving Citta Di Viagrande, with Barbagallo, 55, playing in his final outing.

Instead of the usual and more traditional methods to make it a memorable occasion, perhaps with a low-key late substitution to take in the applause, he opted to go with something a little more extravagant to say the least as he staged his own kidnapping in a helicopter, as seen in the video below.

It’s added by the journalist below that the relevant safety and security checks were all done in advance and so clearly it was a well thought out plan, and while it is utterly mad, it’s actually quite amusing and Barbagallo will certainly have a tale to tell in the years to come on how he marked the end of his playing days.