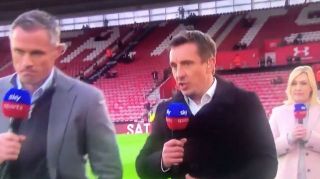 Ahead of Liverpool’s clash with Southampton on Friday night, Gary Neville and Jamie Carragher had started their punditry duty early at St. Mary’s.

The Reds would go on to win the game 3-1 to move back to the top of the Premier League table, but not without a good fight from Ralph Hasenhuttl’s side who took the lead early on but couldn’t hold onto it thereafter.

Nevertheless, there was a hilariously awkward moment in the build-up to the game, as seen in the video below, where Sky Sports presenter Kelly Cates makes a smooth segue into the next feature on the show involving an interview with Hasenhuttl.

However, the Sky Sports team got this one horribly wrong as it just looks like Neville and Carragher have left her standing alone as they walk off continuing to answer the question and build into the next part of their analysis.

To make matters worse, poor Cates looks rather crestfallen in the background, and so this unfortunately didn’t work at all and it left some cringing while others thought it was hilarious judging from the reaction on Twitter.

It’s fair to say Sky Sports probably won’t be doing this again though, but that doesn’t take away from another great job from Cates and all the pundits who continue to produce brilliant coverage on the whole.