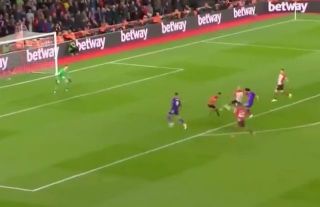 Mohamed Salah stepped up and delivered when Liverpool needed him most as he scored a brilliant goal against Southampton on Friday night.

Naby Keita had scored a crucial goal before half-time to bring the Reds level against the Saints after Shane Long had put the hosts ahead early on.

However, with so much on the line and with Liverpool unable to afford a slip-up in the Premier League title race, Salah stepped up in the 80th minute and after leading a rapid Reds counter-attack, he produced a sensational finish to spark wild scenes of celebration in the away end, as seen in the video below.

It was a wonderful goal from the Egyptian international, and with Jordan Henderson bagging a third for Liverpool just minutes later, the win over Southampton puts them back top of the Premier League table above title rivals Manchester City.

While they have played a game extra, there is no doubt that they would prefer to have the points on the board and to shift the pressure onto Pep Guardiola’s men, who are in FA Cup action this weekend and so will have to wait to produce their response.

Super Mo Salah!!! What a counter attack by Liverpool ??? pic.twitter.com/Vdk1CVF0I4

Please follow : @goalstv3 to enjoy all goals on time ?#SOULIV