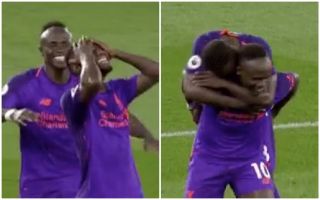 Naby Keita scored what could be a crucial goal for Liverpool against Southampton on Friday night, and the relief was obvious for all to see.

The 24-year-old was making his 28th appearance for Liverpool this season, and he had yet to get off the mark for the Reds since his summer switch.

After Shane Long had given the hosts the lead early on, it was Keita who struck in the 35th minute, as he headed home what could be a crucial equaliser for the Merseyside giants as they look to go back top of the Premier League table ahead of title rivals Manchester City.

As seen in the video below, the Guinea international’s relief was all over his face as he savoured the moment in a lovely and personal way, that was until teammate Sadio Mane made his way across and the pair put together what can only be described as a unique celebration.

Nevertheless, it was a memorable moment for Keita, one that he’ll hope means a lot for the team as a whole too as they look to avoid any more slip ups to end their long wait for a league title.

Mane and Keita ???? the relief on Keita’s face ???pic.twitter.com/nKRgZkwRy6

I mean the celebrations between Mané and Keita there… my heart just melted.#SOULIV #LFC

Keita scored and mane celebrates i love my lads #YNWA

Naby keita reaction when he scored a goal but Mane was more thrilling.. those two brothers really love each other??#SOULIV